Read below for a brief overview and history of the Dodge Rampage.  You also find a short discussion about the off-road and hot-rod communities that have modded Dodge Rampage trucks along with a few unique photos.  Lastly you will find official specifications at the bottom of this page. 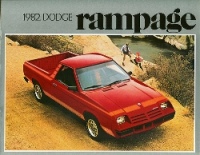 The Dodge Rampage was first released by Chrysler Corporation in 1982 and was also re-badged as the Plymouth Scamp in 1983 only. It was originally introduced with a 2.2L K I4 four cylinder engine that produced a mere 96 horsepower.

The Rampage was operated with either a three or four speed transmission but in 1983 was upgraded with a five speed manual tranny which increased shifting performance.

One of the big selling points of the Rampage as a “Sport Truck” was its load capacity of 1,145 lb for a true half ton rating.  It did this while still achieving a 21 MPG city and 29 Highway Fuel Economy.

The Rampage was based on the 024/Charger which was a Dodge Omni variant along with a Plymouth Horizon. The Rampage fitted with front wheel drive was a departure from other trucks made during that timeframe, and provided for more a more sporty drive.

In 1983 there were special edition Dodge Rampage trucks made called the Canadian Direct Connection Edition. This was also the case in 1984 during the final production year for California Dodge dealerships. This included color variations and stylization succinct with the Shelby Charger.

The Dodge Rampage was discontinued after only three years with demand for car style trucks declining. Because of the short production run the Rampage is a highly rare and sought after vehicle.

Like many niche cars and also similar to the VW Rabbit Pickup and Subaru BRAT, the Rampage is a highly modified vehicle in both the Hot Rodding and Off-Road community.  This can include large engine swaps and lowered suspension or over-sized tires and lift kits.  See below a few examples of such heavily modified and customized Dodge Rampage trucks.

Listed below are the stock specifications for the classic Dodge Rampage.

Have anything to add?  Let us know in the comments section below…

Use the search box above to look for specific features or click on one of the links below to see our Dodge Rampage truck ads listed in descending order by newest first.

To get your Rampage listed on our site click on the link below.